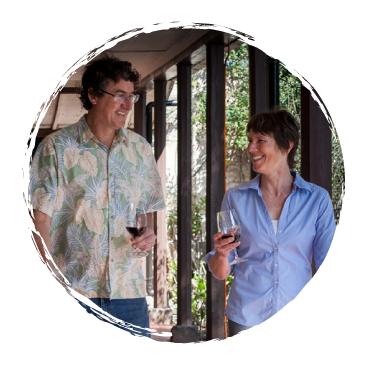 Ed Flaherty and Jen Hoover are two Californians who came to Chile in 1993 to work a harvest and then never left. The country has an exceptional climate for winegrowing, producing ripe fruit with smooth tannins and intense primary fruit flavors. Chile also has some of the best whitewater kayaking in the world, which had more than a little to do with their decision to stay. Their kayaking days are sadly over, but the local wines just keep getting better.

Over the years, Ed has worked with some of the top wineries in the Chilean industry, including Cono Sur, Errázuriz, and Tarapacá. As an executive winemaker, Ed spent more time in the office and the tasting lab than in the winery. He started Flaherty in 2004 so that he could get his hands dirty again–or at least a little wine stained during crush. Flaherty is one of the few boutique wineries in Chile. The business started with about 1,200 bottles of a single red blend in 2004 and has grown to about 40,000 bottles in 2015, encompassing three red blends from Aconcagua and Cauquenes. Production was around that level in 2016. About half of our wine is sold in Chile, while the remainder is exported to Brazil, Germany, Korea, and the United States.

Boutique wineries are on the rise in Chile, where the local wine industry has traditionally been dominated by a few very large corporate groups. In the last ten years, however, smaller projects have been gaining foothold and developing a following in the local market. Flaherty Wines is one of the founding members of the Independent Vintners’ Movement (MOVI), a trade organization for small owner-involved wine projects. Among other activities, the group organizes an annual tasting, MOVI Night, held in Santiago in November of each year.

Most of this website is about growing, producing, and selling wine, but the process doesn’t end there. Despite all the talk about the art of winemaking, wine is ultimately a beverage that is meant to be consumed—and it is rarely consumed on its own. So while Ed is in the cellar working on his blends, Jen is usually in the kitchen, pulling together ingredients to feed visitors or the crew. Flaherty Wines is a boutique winery in Chile
specializing in red blends since 2004.

Ed Flaherty and Jen Hoover are two Californians who came to Chile in 1993 to work a harvest and then never left. The country has an exceptional climate for winegrowing, producing ripe fruit with smooth tannins and intense primary fruit flavors.